The problem it solves

But what if something went wrong with the container as a result of some configuration issue? Say for example it could not connect to another container over a SDN (Like in this example).

Then you need to check if your docker container/Dockerfile simply is not configured correctly or if your application did fail for any other reason whatsoever. And this exactly what this recipe will help you to do.

Debugging containers also helps to get comfortable around them, playing with them and working with them.

We are going to explore the debugging by working with an asp net core application that is running inside a docker container and should be connected to a postgres database which is also running in a docker container. The problem will be that the connection string is not correct for connecting via loopback interface (localhost).

This is because if you run an application inside a container the localhost now refers to the container and not to the docker hosts localhost anymore.
You can read up on this in my posts about integration testing.

I assume that you cloned the repository and run all the commands from its root.

Run containers manually and in background

The first issue we will be looking at is when we run a container with the –d flag as detached (in background).
This then does not print the logs immediately ot stdtout.

For this we start with the following docker commands:

We can clearly see that curl could not connect, so something must be going wrong here.

1.) Simple logging of a container

A.) Identify that a container is not run correctly
With the following command we can see that the container is correctly run but does appear to have stopped.

So the postgres container is up and running but we still want to look at it if the database can be connected to.

First we check if the database is up and running by either connecting to it:

If you do not have a local postgres installation then use the following command to execute the psql command directly in the container.

You need to remember to change the port to the one exposed by the container not the mapped docker host. Which will hear be 5432.

The inspect command prints a lot of information to the stdout.

It includes things like Networksettings, the file system in use, where volumes and data are stored, the state of the container and much more.

It also shows you were the log files are located. You could cd into the docker daemon and to that path and open the file.
But it is way better to utilize a docker command.

C.) How to show logging files from the application inside the container
But instead of going there you can utilize

This will show you the stdout of the container on your terminal.
With inspecting this you might be able to find a hint why your application stopped working. 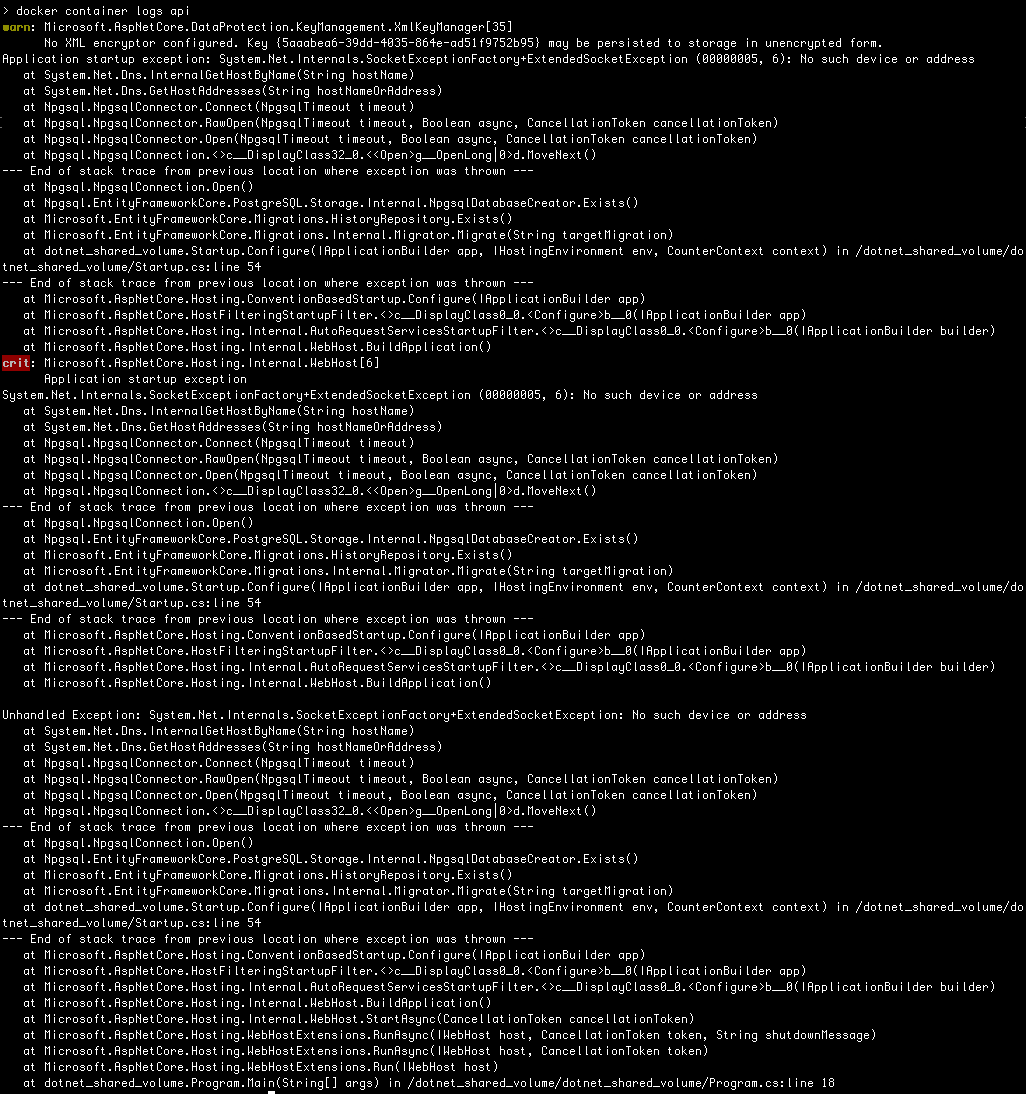 We can see here that it is a SocketException, I already know was the problem is because I purposely created an incorrect connection string.

But from the StackTrace we can find that NPSQL Exception points to some connection issue with the postgres database.

So this is our important clue. Something went wrong on connecting to the database. But we know already that the database is running correctly.

This means the appsettings are at fault somehow in the docker container (because this is were we store the Connection string, right 😉 ).

We could have one of the two following problems here:

and inspect it with our favorite file explorer.
The file yielded:

We have two problems here:

After that we push it back to the container with

After that we restart the container with

Et Voila it works like a charm as we can see with curl:

But there is also another way to inspect a file in a container that has stopped. Even though I like the other one more we will explore it here nonetheless because it can come in quite handy:

First you do again a docker list -a and find the ID of your container.
Then you do a

This creates a new image from this container.
With this image you can now run the following command with a changed entry point to enter the container 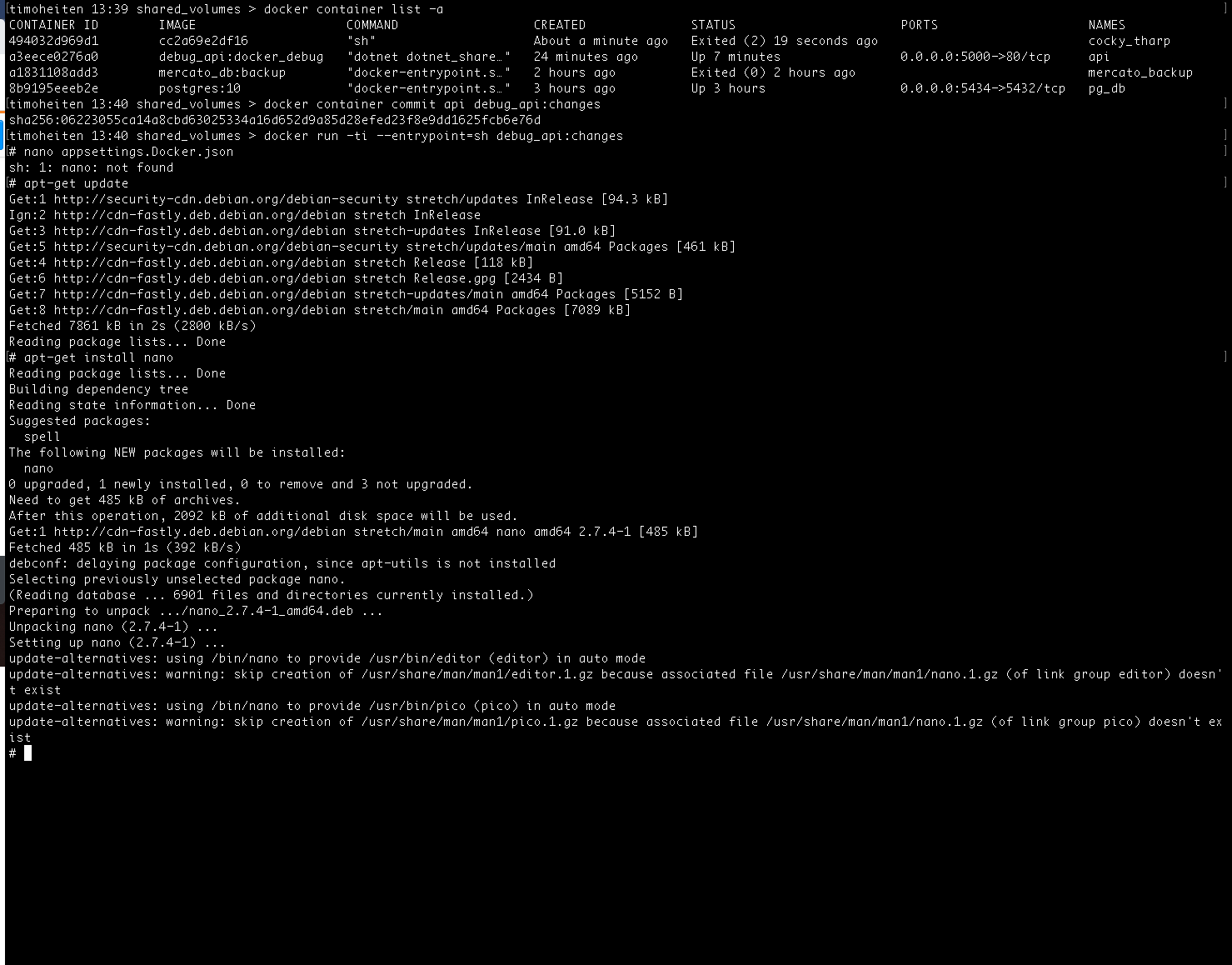 Then we install nano and look into the appsettings by downloading nano and using it to examine the file: 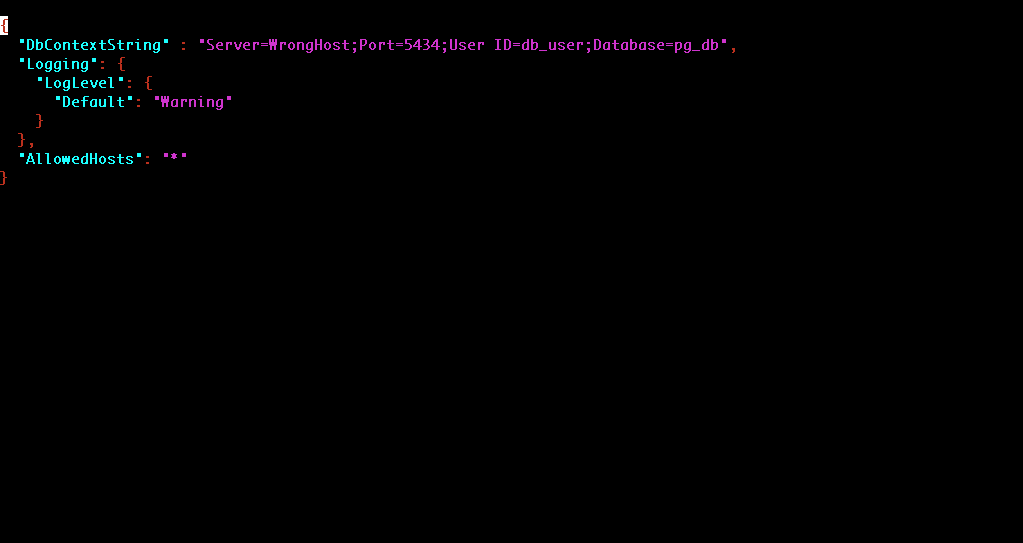 The file is obviously the exact same we had before with the copy command. So we change it to the correct file mentioned above.

After that we leave the container with ctrl+D create another commit and create an image from that.

We can then start another container from this image and have the updated container that will also connect this time.

But as you can tell it is way more to do this way.

For a container run in background with the –rm flag this techniques will not work. So we will explore now what we can do then.

It might be obvious but if you run a docker container with -d and –rm flags you will not be able to see what went wrong with the above commands, because the container is already removed by the docker daemon.

Which puts out the information about the used image, like environment variables, configuration, Entrypoints and the run commands and much more.

Another more obvious way is to start the container manually in a new terminal window without -d (and without –rm) to obtain the logs printed to stdout. 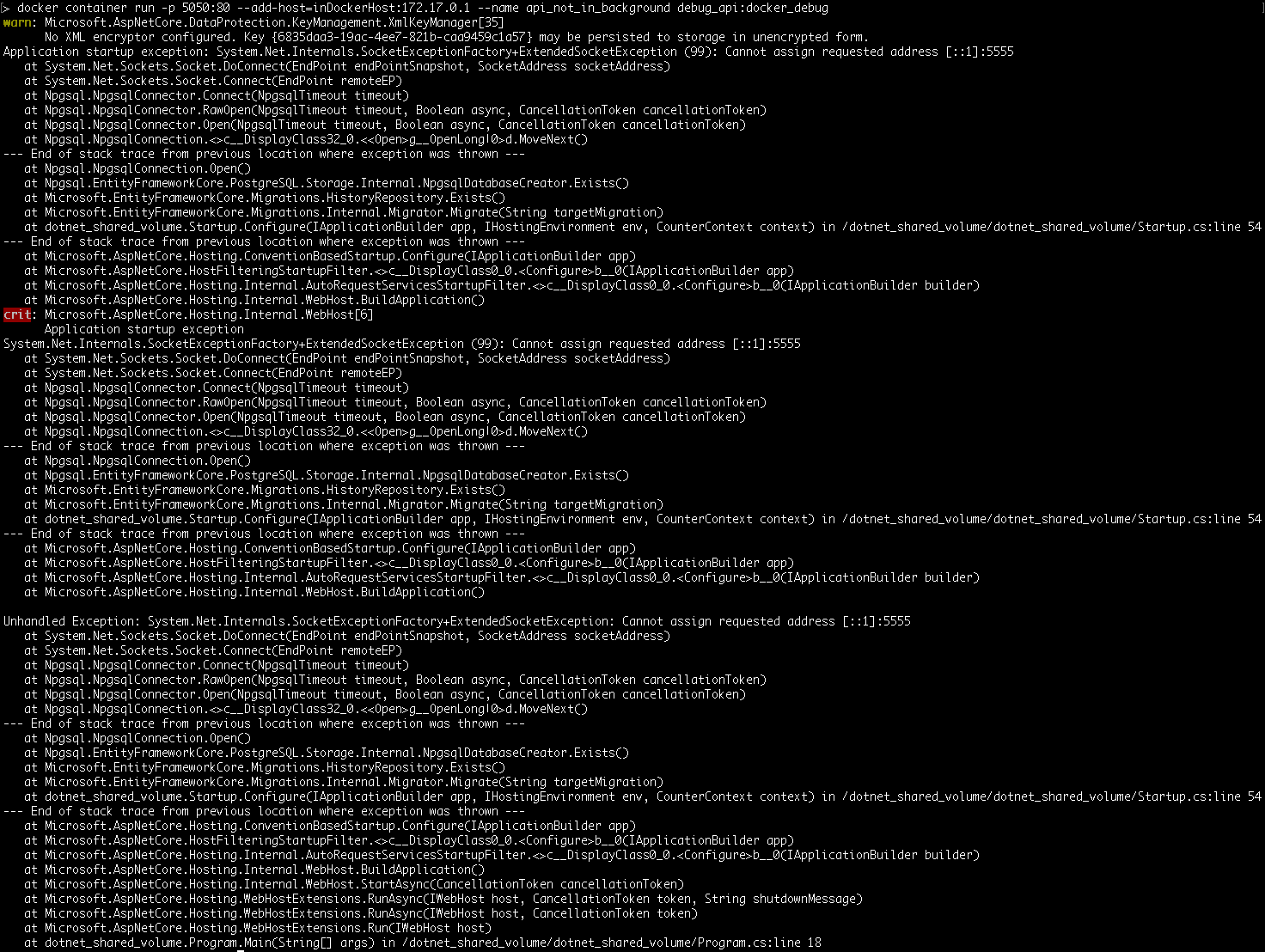 which prints the logs to stdout.
To then fix this you can refrain to the steps mentioned before.

Also some general tips if you are stuck for a given image or container:

How to avoid mistakes in general:

In this post we will create a RabbitMQ instance inside a docker container and run each a consumer and a producer application in .Net to work with this instance. When you do not know my Read more…

In this recipe we are going to look at how to setup a postgres container from a database backup file. When you do not know my recipes take a look at the introduction, or check Read more…