Also this post will show you one way to do this, there are of course several other possible ways.

The following pitfalls made it hard for me and gave me the reason to write this post:

Requirements to work this examples

For you to follow the examples of this post you need to have the environment set up. This requires you to install the following parts to your system:

Also we need the following directory structure at the root of the project file that looks like this one, or similar to this ( you do not need to have exactly the same names, but it will be easier this way. or simply download the source code from github) 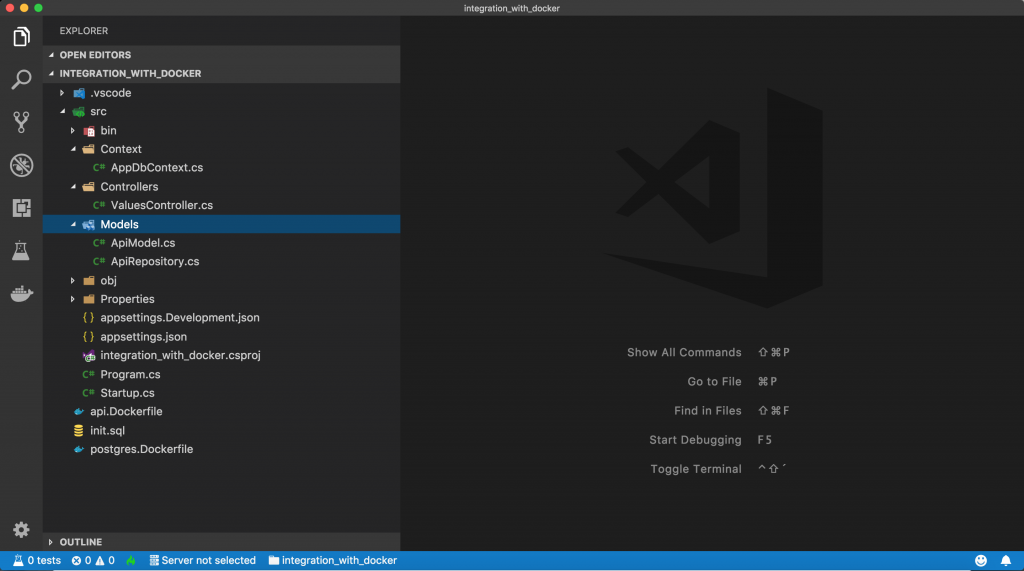 What does this give us?

I ran into this scenario when I was creating some automated integration testing for a build pipeline, where the web api should be set up for each test as close to the production system as possible. The tests then where run with a bash script, that send off some requests via curl to the actual application and checked for the expected status codes. (I will include a sample script that can be viewed in the github page and at the end of this post, but without the status code checking. For that see my post on test your web api)

For each full test run, the container of the application and the database where build from an image and run as a container. Then when the script had run all requests, the containers where stopped and disposed. This is the blueprint for this post, because it is a quite common scenario for integration testing in a contionous integration/delivery environment IMHO.

This post will obviously have a slightly less complicated application, but the pitfalls of this approach will still be visible in plain sight. Also because this is a common scenario it can be slightly tweaked to be applied to other databases and applications.

So without further ado lets get into it.

For the web api we create the following docker file that is called api.Dockerfile:

First we need the runtime of dotnet as a base image and expose the standard port for http calls which is 80.
With that image we then proceed with pulling the dotnet sdk so we can build our project inside the container. Obviously before we can do that we need to copy the directory containing the source code to the container itself. Then we restore all packages and build the solution.
At last we create the application and move the entrypoint to point to dotnet and the .dll.

Before we now create the image and container we first need to create the application code. I used the simple ValuesController from the project template for this and tuned it for a simple Model. For this we create a Model directory with the ApiModel.cs, an AppDbContext.cs for the use of EF core. With this setup we can then use migrations on startup of the docker containers to create the database. In this code I still use an init.sql script to create the database, but this was generated from dotnet ef core CLI. This is a similar approach we would use in production. To view this code in detail, pls refer to the github project as it is not the focus of this post.

To create an image from this we run the following command from the root directory of the application.

There is already a postgres base image that you can find on the dockerhub.
In this post we will be using the one with the tag alpine because it has a very small size and leads to small image sizes in this way.

But our container cannot simply only use this image, because we want to run a init.sql script to setup a basic database that can be written and read from when the api connects to it.

So the image will look like this and be called postgres.Dockerfile:

As you can tell we use the base image from the dockerhub with the tag :alpine as mentioned above.
We then set environment variables for postgres_user and the name of the database.
Also we Expose the port 5433. this is important, because the standard port of a postgres installation is 5432, and if you have an instance of postgres running it will most likely be on port 5432 and might block the use of this container. There are other possible solutions to this problem, but I choose this easy approach.
Next up we create a directory for the initdb, which is essential to run the init.sql script for inital database setup. Note the -p flag to create the directory if not exists, or ignore it if it already exists.
The last command runs the init.sql script in the database if the container is started. The script can be seen in the github project, like the code for the api.

Now test the image and the container with the following commands:

which results in the following output 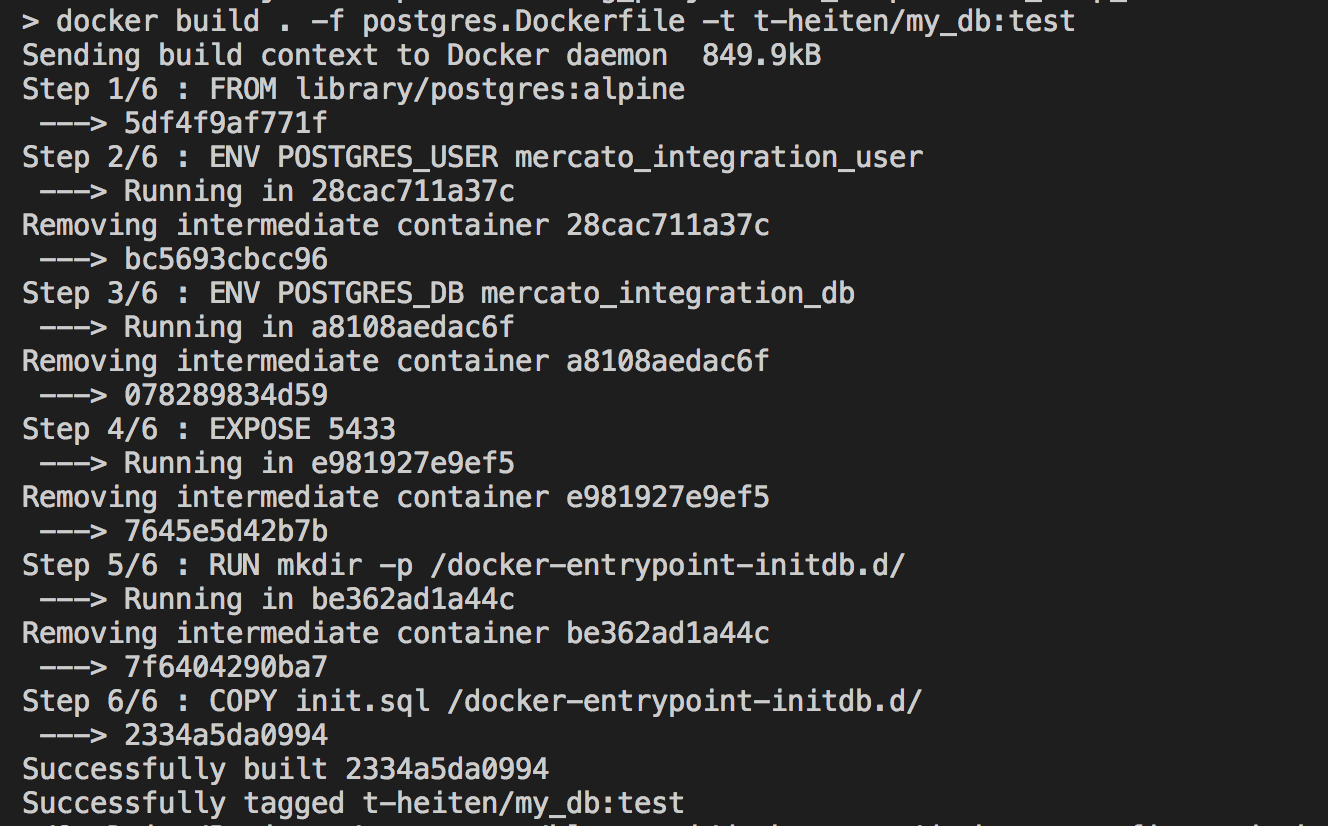 which then results in:

So we now have the image, tagged as test with the name t-heiten/my_db.

Even though I will not show the contents of the init.sql, I still want to provide you with the general idea of how to create it.

Next up we will run the containers and check if everything is wired up correctly.

Run both containers in isolation

Before we get to the final automation step, we first set up the containers individually to see if it works as intended.

For this simply run the following commands, inspect if all works:

Simply check if the containers work properly with a curl request to the api:

Which yields a status code of 500: Internal server error. When we check the logs generated by the docker container of the api, we can see that the connection to the database fails. This is probably the issue I struggled the most with.
To check this you run the following command:

or if you are using VSCode, use the following Extension and right click the container named t-heiten_api and show logs from the drop down: 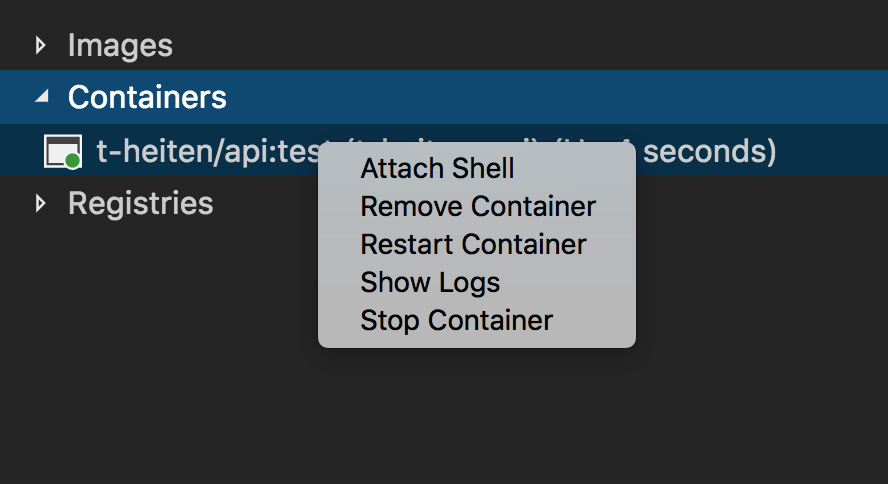 So the issue here is:
When you have the api in a docker container and your connection string points to localhost, it is now the localhost of the container context and not of your local machine. Which makes sense I guess, but was hard to figure out for me.

So to compensate this issue we have different methods, from a custom network to linking or adding extra hosts. I use the latter because it works well with the final automation step.
If you use a network you also would require a load balancer to be set up, because then the containers in the network could not be reached from the outside. We are going to explore this in a dedicated post on networks with docker and asp net core. And the linking is like the network but a legacy feature that will at some point not be supported any longer. So I simply avoid to use it in any case.

We simply change the run command of the docker container and the Connectionstring in the appsettings:

Then check again with curl:

Et Voila it works (the three entities came from Postman, so I cheated a bit;-) )
But this is not sufficent for automated test setup. Sure you could write a script that sets this up, but there is a better way: Docker compose!

Docker-compose to the (automation) rescue

Docker-compose is the built in docker way to create an orchestration of different containers. You can read up on it in this blog or on the official website.

In essence you create a yaml setup file like the one below that pretty much subsumes your docker build and run instructions.
We create two services, the postgres and the api one. Both are build from their respective docker files in each test run. If you are not familiar with yaml, please take a look at this page.

This is then run from the root directory with the following command. To be discovered automatically the file should by convention be named docker-compose.yml (or .yaml at the end)

This will now build and run your container according to those descriptions.

We test the result again with curl, which yields the same output as above (again I created the three entities with postman)

Bash Script all the things

With this file in place we can now use this command in a script for our automated integration testing. Which then can be run in a CI pipeline.
See the following script with simple curl statements and setup as well as teardown code for the containers.
You could extend this in a lot of directions, like with checking status codes and returning exit codes etc. But you get the general idea.

When you run this command it will output:

In this post we created a simple AspNet core web api that is connected to a postgres database. This does not sound shockingly interesting. The interesting part about this is, that we used docker containers and built in docker techniques (at least built in in docker for mac) like docker compose to automate the setup of the application.
This was all done with the one purpose of integration testing as an automated step in mind.

We looked at some issues and pitfalls along the way and how to overcome and solve them.

I struggled a while to solve this, and hope it helps you or inspires you to overcome the same or similar issues

In this post we will explore how Docker compares to Virtual Machines: Docker vs VM as a battle so to speak. We will learn how and if this works in general and what their use Read more…

Learn docker networking and Docker DNS with a simple setup of alpine containers and ping.